The basis of a successful state is a developed society.

Richard Dion: In promoting the EITI Kazakhstan plays a leading role at the region

“We are for media free from state order”, Diana Okremova 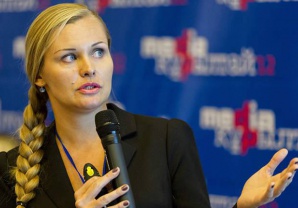 In 2012, the Northern Kazakhstan “Legal Media Center” Public Foundation, with the support of the Soros Foundation-Kazakhstan developed a database for Government’s media orders.

At the moment, the database is the only resource where one can find information about the funds allocated for the adoption of information policy in Kazakhstan. Does the system contribute to the development of the media market, how well is the budget money spent and how are projects being monitored and evaluated? The answers to these and many other questions can be found in our interview with Diana Okremova, Director of the Northern Kazakhstan “Legal Media Center” Public Foundation.

– Diana, could you please tell us how and when did the idea of ​​creating the database for the Government’s media orders emerge?

– The idea of ​​creating a database for the Government’s media orders  emerged a very long time ago, when I was working as an editor of a regional newspaper, which, I must say, never received and still does not receive the  Government’s orders. I saw from the inside all of the problems faced by newspapers that are forced to survive on their own, in our environment, to look for advertisements and to take care of the content. When I moved to the NGO sector, I began lobbying this issue; but I must say that many donors have refused to support the initiative. Unfortunately, anything that has to do with the State’s budget money is a taboo topic for many organizations.

Our first project with the Soros Foundation-Kazakhstan was against compulsory subscription. Government’s publications are subject to compulsory subscription, when in fact they should be paid for from taxes firstly, and then we are also forced to subscribe for them; it sort of looks like double taxation. As a part of the project, we wanted to make these cases publically known. As a rule, people do not talk about them. under (perceived) pain of dismissal and reprimands. Within the project we have achieved some success as people started talking about it and backing out of compulsory subscription.

Then, thanks to the support of the Soros Foundation-Kazakhstan, a project  emerged to create a database for the Government’s media orders. It was a very difficult and long process, and the information on funding was virtually closed.

– Let’s talk more about the database itself – how often is it updated, and what information can be found there?

– The database (http://lmc.kz/baza.html) has been functioning since 2012, but information about the Government’s media orders could have been found there since 2008. In 2013, the database became complete – now including all of the money allocated for the adoption of the State’s policies. The database is updated once a year, and here you can find all of the information on Kazakhstan: see information on lots, and the media by their type, etc. In Kazakhstan, financing comes in two ways: 90% comes through direct government funding (under the State commission), and the remaining 10% comes from competitions and tenders announced by the ministries and  city administrations. Every year, about KZT 42 billion are allocated from the State treasury to the implementation of information policy. The financing peak was in 2015; however, there have been no significant reductions in 2016, despite the crisis. While information about tenders and competitions is publically available, the information on the Government’s (media) orders is almost impossible to find; even though under the law all recipients of public procurement must post all of the information on their websites.

The information on funds allocated to the implementation of the  State’s information policy has to be searched out in different ways – on the Internet, by writing letters to the media, ministries and city administrations. Just recently, the Ministry of Finance gave us an adequate response with a breakdown by years and amounts of money.

– What are the problems and mistakes that were found in the preparation of the database and media monitoring? Generally, how do you think this system can be improved?

– During the preparation of this database, we wanted to understand whether the existing system contributes to the development of the media market, how efficiently the State budget money is spent, and how projects are monitored and evaluated? Answers to these and other questions have been discouraging.

They say that the Government’s orders are aimed at the development of the media market, but in reality, everything is quite the opposite. Some media outlets receive the Government (media) orders, and others do not, this creates a distorted market, which cannot develop normally in a competitive environment. Those  media outlets with the  Government’s (media) orders have a guaranteed subscription, often compulsory, and also have the ability to lower prices for advertising. However, independent publications do not have such privileges. Naturally, there can be no media market development under such circumstances.

There are also problems with the way the money is distributed. All procedures take place according to the law on public procurement and are sold like ordinary goods, such as cucumbers or slippers. That is to say, that in awarding the Government’s (media) orders people just look for the minimum price. But again, journalistic work cannot be sold like cucumbers. Somehow this should be done differently, focusing on the quality of the materials.

Generally, we suggest not to invest in a particular paper, but rather into the entire sector, contributing to lower prices for printing costs or Kazpost services, to make public reports  from the allocated money, and to mark materials produced by means of the  Government’s (media) orders with a special marker. This is probably needed more in order to discipline the journalists themselves. So that journalists can learn to publish high-quality materials, rather than trying simply to fill the square footage.

– Diana, you have been monitoring public procurement of the media for five years now. Are there any particular changes in this regard?

– While at the beginning the ministry did not think much of us, now the situation has slightly improved. They attend our events, try to initiate meetings and ask for our opinions. However, there is still no uniform standard for publishing State budget information. Not all state agencies publish information on their allocation of funds; many refer to the  State’s procurement website. But it is rather hard to find information there as well.

The formation of lots also remains an open question. To date, the lots are formed in the relevant ministries, jointly with the  Presidential  Administration and the Ministry of Finance. We have asked many times, on what basis they form a particular lot? And each time the answer we received was that it is done based upon average advertising costs. That is a lot of money! By our estimation, this money could cover round the clock broadcasting of 17 TV channels!

– How should the system operate ideally? Could you share your vision?

– Ideally, there should be no Government (media) orders. There is no need for government procurement, since newspapers must be self-supporting, and the industry itself should develop based upon the rules of business. Subsidies destroy any competitive environment, harm the media market and generate corruption.

I agree that Government (media) orders are necessary in order to publish laws, statutes, amendments to the Laws of the Republic of Kazakhstan, and for the coverage of various political events. But to do all of that it would be enough to support one or two republican newspapers. But the rest of the media needs to work under market conditions, that is, to fight for the advertiser. After all, where there is competition, there is an incentive to be interesting and to evolve.

– What other projects are you working on in collaboration with our Foundation?

–  Currently, we are planning to implement a project aimed at improving access to budget information and to increasing public interest in this data. Somehow, for the most part, taxpayers in Kazakhstan are very indifferent about how the government spends their hard-earned money. We hope that the project will encourage bloggers and citizen journalists to conduct more investigations in the field of budget spending and public procurement.

– Diana, thank you very much! May you continue to succeed.

“We are for media free from state order”, Diana Okremova