Callum Voge, Project Syndicate: “To us, it is important not only to deliver the content but also broadcast opinions from Central Asia.”

A new Chair of the Executive Council, Ms. Aida Aidarkulova has been chosen to lead the Soros Foundation-Kazakhstan

Economist Kuanysh Onalbayev, “Many people have no clue that they could know about the budget.” 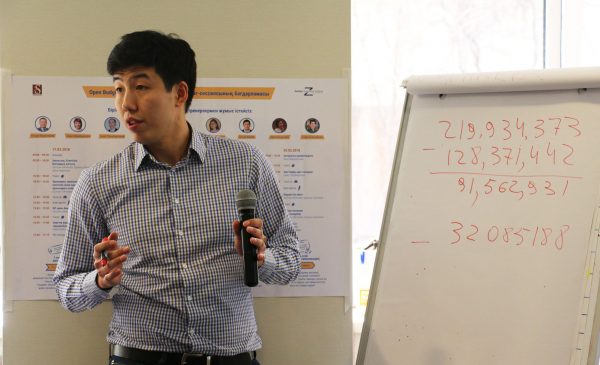 The Program Open Budget Fellowship will held for the third time in 2019 with the support of the Soros Foundation-Kazakhstan. We have spoken to the alumnus of the first intake of the program, and now its full-fledged trainer Kuanysh Onalbayev. In an interview, he told about how the training works, what researchers encounter and how transparent budgets in Kazakhstan are.

After graduating from university, Kuanysh worked in the business area and state companies. One day he saw an advertisement in social networks about selection of participants of the program Open Budget and decided to apply for it:

Kuanysh Onalbayev: I decided to submit an application out of curiosity as it was interesting to know how they finance from the state budget such state companies like the one I was working in, what resources of the National Fund are spent on… and so on and so forth. In 2017, when I took part in the program, it consisted of four sessions. The first part was an introductory session, after which anybody could chose either not to participate further or continue the training. Also, there was selection on the part of organizers. We had visiting experts from Mexico, who spoke about the world experience; Kazakhstani experts spoke about our system of budget formulation and budget implementation and opportunities of public control of the budget. It turned out to be such an interesting and useful mixture. I went through all the stages, conducted my own research. It seemed as if I discovered another world for myself – the world of civil society.

Kuanysh Onalbayev: In spite of being an economist, I did not know many issues related to formulation and approval of the budget process. For example, I learned that the budget for the next year is already started to be formulated in May this year. And there is a long process of discussion and harmonization of the budget until September. It was interesting to know and understand how these mechanisms operate. There was also another revelation for me that all the data was transparent, and this information could be analyzed. Some people do not even realize that they could know about the budget. For instance, in the budget of 2017, billions were provided for conduct of researches. It would be interesting to have a look at the results of researches and know how they affect the state decision-making.

Kuanysh Onalbayev: Within the program, I undertook my own research on the theme of the government funding of the professional football.  I used to be into football and decided to study the process of financing professional football in Kazakhstan because nearly all football clubs are financed from the state local budget. I realized that there were not quite transparent schemes, that football is financed not that effectively, but after analysis conducted, a more complete picture was formed. Over 100 billion tenge from the local budget has been spent on financing professional local football clubs for 5 years. In my opinion, it would be more effective to allocate the money to development of sports facilities and children’s and mass sports, as it was done by Iceland in the past and achieved a breakthrough in the world football. So I got seriously involved in an analysis of the state budget and decided to join the team Zertteu Reserach Institute, and became a co-organizer and trainer of the Open Budget Fellowship in 2018. 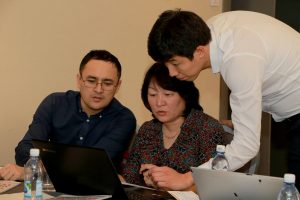 Kuanysh Onalbayev: The main aim of the project ”Open Budget Fellowship” of the Soros Foundation-Kazakhstan is to form a pool and network of experts who are good at budget and can put timely and correct questions to state bodies. We often pose questions after something has already happened. Actually, there are mechanisms which let us ask questions at this stage, when there is still time and opportunity to change something, to do it in such a way so that our opinion is taken into account. If everyone in Kazakhstan deals with this, probably the budget resources will be spent more efficiently and we will live better. I think it shouldn’t be the responsibility of the person himself – to go and understand figures. The government should also be responsible for the financial literacy of the population. If the authorities and akimats did not want to be criticized by people, they would ask people what they need and what they want and let them know that interests of citizens are considered.

Each of our participants has carried out research regarding budget. Every research often somehow relates to its author – the problem which the researcher has faced. Therefore, our alumni are trying to improve the situation in this or that sphere financed from the budget, say, increasing the efficiency of expenditure on the state language training of civil servants.

Kuanysh Onalbayev: In my view, generally speaking, there is transparency in the country, but just for show. There are the world standards which make states make information transparent. Another matter is how this transparency is this transparency is implemented? For example, we have the Law on Mass Media, there is the Law on Access to Information, according to which anyone can request information about the budget concerning expenditure of resources. He is supposed to receive a response within two weeks. In fact, we are faced with that our alumni including me send requests to the state bodies – from local authorities to ministries. Half of them were answered with runaround letters, some agencies did not respond at all. They rarely provide full information. There is a portal “Open Budgets” as part of the portal “Open Government”. It’s a good idea, based on which in the portal, all the budgets of all state bodes have to be collected. Unfortunately, the performance is far from satisfactory: all data is dumped in a pile, and to find something, you have to sort out this pile first. There are no filters and other tools, so to find a budget, you have to spend lots of time.

Kuanysh Onalbayev: There is another problem – the budget posted by the state body has no single structure. If you go a website, the information about budget will be in one place, on another website – in a different place. It is very difficult to navigate websites which has no structure. Also, all data are presented in the general aggregate, there is no serious detailing. For example, there is no data about the content of one concrete school, instead of that there is a section called “Expenditure on All schools”. In this respect, there is some small progress: the akimat of Almaty has begun posting budgets of all schools, clinics and hospitals since last year. I am sure this experience has to be disseminated in all regions of Kazakhstan.

Also, starting from 2018, a new notion of “Civil Budget” has been added to the Code of Budget. There has not been such a notion before. In general, budget is read poorly and analized poorly, for a non-professional, it’s hard to understand something in it. “Civil Budget” is a simplified version of budget understandable for a common citizen. Starting from this year, every state body has to post such civil budget. The question now is, how well they will meet the requirement, since in most of cases state bodies post the same figures, but in smaller numbers. They insert the most understandable numbers in a presentation, so to speak.

Kuanysh Onalbayev: To be honest, it is everywhere. The results of monitoring of our participants showed that in many industries there is non-transparent budget and its expenditure. This is despite the fact that topics of participants’ works are diverse and cover various sectors. Participant of the Open Budget Fellowship Galymzhan has examined how well schools in Shymkent are equipped with sports facilities. The Ministry of Education and Science has the Order, in accordance with which each secondary school must have 94 items of sports facilities. He went through the list and found out that the availability in examined schools is around 20%. That is to say on average, there are only 30 items out of 94. Secondly, apart from the availability of the facilities, the latter must be in a certain quantity. Say, there must be twenty footballs and so on. He has studied the process of state procurement and found out that they purchased the items not listed among those 94 items of sports facilities. And one way or another, all the results of researches indicate problems like lack of financing, inefficiency or non-transparency of use of budget resources.

Kuanysh Onalbayev: Certainly, I was astonished; however, I can’t say that all is so bad. Our program lets not only reveal the issues in the budget area but also offers recommendations. I hope that step by step, we will be able to change the situation. For example, we have presented the results of researches of our alumni on the platform of the State Service and Anti-Corruption Agencies. They demonstrate openness and are ready to listen to our recommendations. This gives hope that our attempts are not in vain and the dialogue is possible.