Founders of the discussion platform PaperLab: ‘Officials and experts should come out of their filter bubbles’

Gunta Ancha, the European Disability Forum: ‘Life is too short to shut yourself off at home’ 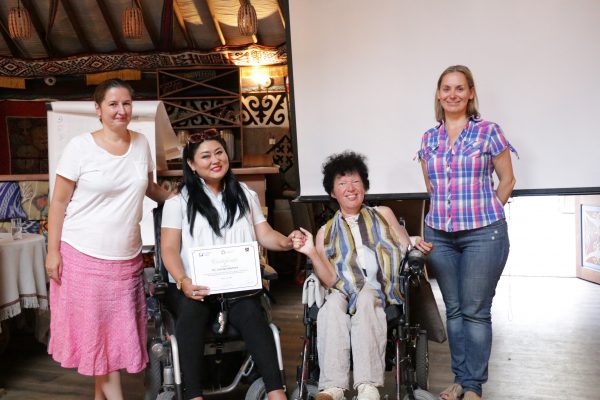 Last August, the Summer School on the Rights of Persons with Disabilities of the Soros Foundation-Kazakhstan ‘Social Inclusive Initiative’ was held in Almaty. School speakers Gunta Ancha and Yanina Arsenyeva told us over a cup of tea how to draw the majority of people to issues of people with disabilities and fight against social stigma.

– Gunta, we know that in Latvia, there was an experiment when on benches in public places, they left a book about a boy who was born in a society where everybody could fly. This is an interesting experiment which makes one think about inclusion and social adaptation of people with disabilities. How to effectively engage people in this topic?

Gunta: The main point is that it has to be fascinating. The thing is, people do not read booklets anymore, they do not visit websites that often, nor do they search for some information about living with a disability. They need something gripping; something which has not existed before. For example, our experiment with the books. We have obtained an amazing result – people were reading the book and left it on a bench. We constantly think about new formats, how to draw people’s attention to the problems of people with specific needs. When we speak about people with disabilities, they go like ‘Ohh, poor them’, ‘Aww, they are really struggling’. Our idea is to present this topic in a different way: these are people who can, are able and capable of acting, but they need support. For instance, we presented a foreign book about a young man who could not speak, but owing to a special computer he was able to decipher and communicate what he wanted to say. We invited people with the same problem to a presentation, and asked them to write their speech on paper. The fact is that in Latvia, we do not have such a computer, so we invited actors to read out their letters. People in the audience got lost in thought. This is how we are trying to build our relationship with the society.

– Yanina, as a person without disability, you actively come out and advocate. When someone has no personal experience, the question arises – to what extent one can be competent in this matter. There is even an idea that you put yourself in the shoes of a person with disability.  What do you think of this?

Yanina: You should never judge by appearance if a person has a disability or not. You are right about me – I do not have it. I rarely speak in public: at conferences, I represent opinions of people with disabilities only in exceptional cases, say, an expert with a disability is unavailable, or if it is unsafe to leave his or her country, or speak in public. I had such cases. Usually I support spokespersons of organizations of people with disabilities backstage, so as they could speak confidently and represent themselves and their organization. I agree with that the person with disability is the best expert in his own life and situation. You can expand this personal experience and expertise may be expanded through prompting what time it is better to use, what words to say, how to prepare for it. I do all these.

Gunta: I would like to say that not always only people with disabilities may be the best experts. I know cases when people with disabilities who are not professionals do some things not that well. We had a guy in a wheelchair; he used a simple wheelchair which was light, and he was not tall. He consulted on installation of a wheelchair lift in the building of the Ministry of Welfare. As a result, they bought the wheelchair lift with a low lifting capacity, which is suitable only for light wheelchairs. It is about the case when people have only their experience and they do not know about other people’s experience – this is not always good. That is why I think it is normal when people without disabilities participate in advocacy. It is important that you see the point and understand what you are speaking about. It is important that you communicate with people with disabilities. Another thing is that there could be situations when disability may play into your hands, especially if you are going to a meeting at the Ministry. Or, for example, if it is a question of availability, as they would not visualize you otherwise.

– At the meeting, you were speaking about the language which is used talking about disability. I assume, this equally relates to both people without disabilities and people with disabilities. What do you think how to fight against discrimination inside yourself?

Gunta: Inner discrimination exists, particularly if it is acquired disability, the person withdraws into his shell. He is surrounded by his family; friends who take care of him, bring all the things needed. The more he lives such a life, the harder he gets rid of the thought that he is ill. When you visit him and say ‘Come on, go work’, he is surprised and replies ‘Don’t you see that I am ill?’ This is so human when the person starts to pity himself, there has to be a trigger to realize that life is too short to shut yourself off at home.

Yanina: Everybody goes through times of self-help regardless of their disability. We all might have different situations: we all have to scrape up ourselves off the floor and go back to the society. It is not a unique case. I had postnatal depression just a few years ago. I am originally from Estonia and everything which concerns mental health is rather unpopular. People think that it is a fantasy and do no take it seriously. What I mean is that everybody has such periods.

– In your speech, you also mentioned mental and psychosocial peculiarities. And if they are quite friendly to wheelchair users or to those with vision impairment, whereas they are cautious about mental peculiarities. They would prefer not to speak about this stigma. Tell me about the situation in your countries, please.

Gunta: Stigmatization still exists. On the one hand, in our country, we reached the point when you should not be afraid, it is not acceptable to be afraid; but on the other hand, if it concerns somebody personally, they would rather insulate themselves from it. There is a town not far from Riga, where the richest people usually live; they wanted to build a daytime centre for people with intellectual disabilities. They wanted to build it in the center, nor far from school. That is where the trouble began! People started collecting signatures ‘against’. It was run by a local deputy who was saying indignantly “What is that? Our kids would come out of school and see THEM”. Later, they realized they did something wrong – they started to be criticized. Under these conditions, opponents of the day centre changed the rhetoric: they start to talk about that they wanted to offer better conditions – in the forest by the river in the open air. It is horrible.

Is there any discrimination within institutions assisting people with disabilities?

Янина: It seems to me that the UN Convention on the Rights of Persons with Disabilities has changed a lot in this respect. Now I look at activism of psychosocial disability organizations at European level: I see the growth, I see respect, I see people’s awareness of what it is. There would not be Article 12, but for psychosocial disability organizations. And the progressive interpretation would not exist without them.