Gunta Ancha, the European Disability Forum: ‘Life is too short to shut yourself off at home’

How Initiatives of Almaty Citizens Evolve into Ongoing City Projects 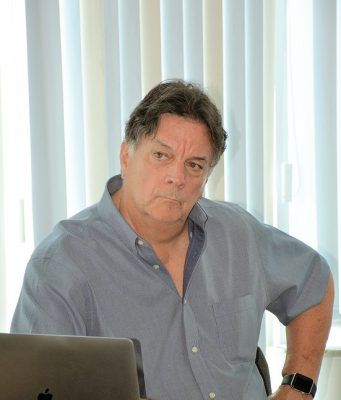 The School of Multimedia Journalism Imedia Project conducted consecutively for three years by the Kazakhstan Press Club has been launched at the end of August 2018 in Almaty with the financial support of the Soros Fund Kazakhstan.  The trainer of the first module is Steve Rice, professor of Missouri School of Journalism.  In his interview he told us why video became such an important element of the modern journalism.

It is the second time in Almaty for the seasoned journalist and professor of Missouri School of Journalism Steve Rice. During his module he taught project participants the nuances and secrets of making a good microdocumentary.  Now it is time for the students to grab their tripods and cameras and start making own micro-docs.

— You teach journalists how to make video. Why do you think video became such an important element of the modern media?

SR: Do you want the truth?

SR: It is because video allows you to make money.  Before a video starts a pre-roll advertising is shown.  The video player is surrounded by plenty of popup ads which need to be clicked on and which lead you somewhere else.  In the United States, at least, we became a nation that does not like to read; people want information delivered to them. In that sense video has an advantage.  YouTube’s popularity is steadily increasing.  My daughter loves BTS (a famous K-pop boy band), she goes to YouTube and watches everything related to BTS.  On YouTube People watch various speakers, travel logs – literally everything.  That’s where the difference between her generation and mine is particularly visible.  Also, video becomes more and more sophisticated.  Its main value is that it tells a story. It gives a fuller picture, shows details and tells a story.  The best part of microdocumentary is that it gives a specific access to the story.  You no longer need a 60-minute film. Everything can be done quickly: you observe, find the right angle and shot a short video about a small thing.

— What time duration is best for the microdocumentary?

SR: The usual duration is between 3 and 10 minutes.  The trick is that audience takes the decision to continue watching a video or not within the first 10 seconds.  So, if they decide to continue watching, then we need to keep on engaging them with the help of tools we call «hooks».  The author needs to come up with techniques to tease the viewer, to keep him/her interested and make them continue watching till the end.  If you are not successful at that the audience will not come back to you.  Very few people would watch through the first minutes if what they saw is not a quality product.  If a website hosts too many poor quality videos people will stop visiting that website.   A quality content is based on an understanding of the rules of audience engagement.  Anyone can shoot a video and not everyone can create a successful one.  One should think of integrating something informative, something entertaining and something educational in a video.

Integrating traditional media and new media is possible because some prefer reading to watching videos, others might want to consume multimedia content.  Traditional media must come to an understanding that information can be distributed through many channels, and not only through pages filled with text.   If you are using infographics, polish your text, think through the layout it takes you to the new level.  One needs to understand that big chunks of text are no longer effective.

— What are the current trends in making of video?

SR:  The new trends are VR (virtual reality) and 360 ° video. We are yet to find out and decide how to use these instruments in storytelling.   The thing is that people improve their skills in making video and documentaries and documentary seems to be playing an increasingly important role in filmmaking industry.

— What can you say about the students who study in your module, what is your first impression about local journalists?

SR:  I think they are hungry, they want to study, want to make a good content.  I told them that video is probably the hardest genre in journalism, hence they need to become multi-taskers: know how to work with camera, audio, editing software, understand different ways of presenting a topic, be able to work with people, make interviews and use music.  There is still a lot they need to learn and they seem to be thirsty for knowledge.

— It might have to do with their education. Often times universities teach irrelevant and outdated subjects.  For instance, the usual approach is that a writing journalists should only be good at writing while a television journalist should be good at speaking only.

SR:  Every journalist who enrolls to our university knows how to shoot video, edit, write and so on, because he/she grew up with a gadget or a smartphone.  People that support the approach we talk about grew up with a newspaper in their hands, carrying a huge photo on a two-page spread.  What we do scares them, they know nothing about video or multimedia, they deny the new trends and do not want to learn.  We have a similar problem in the US, where both newspapers and journalists are scared of change.  I saw photographers who would not shift from film to digital, who did not want to learn to make video.  They were lagging behind because they were unable to adapt in a dynamically changing environment.  Do newspapers in Almaty compete against each other?

SR:  That is not good.  The absence of competition means there is impetus for the owners to develop the newspaper.  Without competition there is no willingness to evolve.   Another problem is that investigative journalism is not advanced in Kazakhstan, because some people do not want to be investigated by media.  In our country the President Donald Trump is suppressing media, because we are working really hard to reveal what he is trying to hide.  He attacked free media, he called our news fake.   The thing is that he comes from a business background where everything was under his control and everyone jumped through hoops for him.  He does not like being criticized for what he has done.

Trump’s actions against media lead to a situation where dictators all over the world began crackdown campaigns against journalists everywhere in an attempt to halt spreading of truth.  When leaders take that kind of viewpoint it is very hard to change anything.