The Journey of a Note 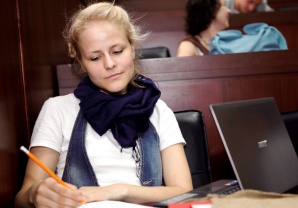 The regular competition of the “Youth Initiatives” Program of the Soros Foundation-Kazakhstan is over. The competition was intended to support social studies of young people aged from 18 to 35 years old regarding topical subjects of the society which are of interest to themselves.

In total, about 40 applications were received from all over Kazakhstan, six of which were approved by the Expert Committee.

So, one of the competition winners, Zhanerke Bizhan (Taraz) in his project “Case study of the youth discrimination in the labor market in Kazakhstan by example of the Zhambyl region” will attempt to reveal the social and labor mutual relations generated in the course of job search and employment of young people. The study will enable to systematize the discrimination problems of young specialists and to identify the directions of improving the youth situation in the labor market of the Zhambyl region.

Maria Rozhkova from the Volchanka village, in the Shemonkhay district of the East Kazakhstan region, is worried by the issues related to employment and leisure of the young people of her village. Her project, “Study of needs and requirements of the rural youth by example of the Volchanka village” is devoted exactly to this problem.

Dana Shayakhmet (Almaty) has set a task of, “Defining the level of civic education and culture of the adolescents aged from 14 to 17 years old living in Almaty”. The obtained data can be used in the development of proposals on improving the quality of held events aimed at increasing the civic participation of young people.

Alexander Soshnikov from Pavlodar will carry out the, “Study of the youth needs in Pavlodar at the age from 14 to 22 years old, living in high-risk areas, which cover the places of training, accommodation, and leisure with a large number of narcotic drug users”. This study is intended to identify the needs of young people in order to submit the obtained data to the state structures and non-governmental organizations involved in the public health issues, organization of leisure among the young people living in high-risk areas. His countrywoman Victoria Loyko will study the level of population tolerance with respect to religious population, national minorities, “former” drug abusers (narcotic drug users being on remission), people living with HIV/AIDS, sexual minorities, within the framework of the study, “Identification of the tolerance level in the society”.

We thank all the competition participants and wish them further creative successes and new interesting ideas!