Nargiz Shukenova, producer of the Clique Film Festival: “In my opinion, a demand for Central Asia has formed in various areas of culture.”

How Initiatives of Almaty Citizens Evolve into Ongoing City Projects 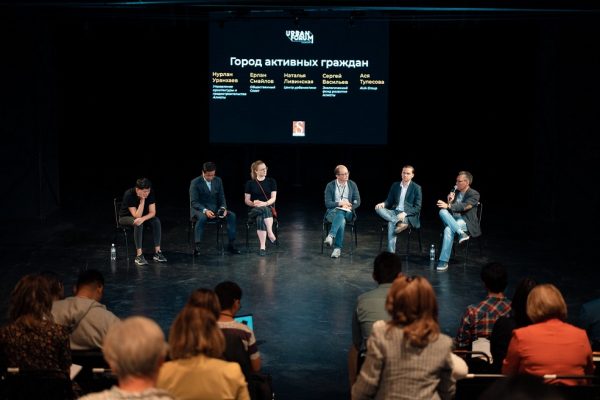 In 2016-2017, the “New Civil Initiatives” Program of the Soros Foundation-Kazakhstan supported 14 city projects conceived by researchers, creative citizens and specialists. The projects were aimed at creating an amiable city environment, whether it is research on availability of parking facilities of the outskirts of Almaty or a theatre platform in the “Tastak” neighbourhood.

Now Almaty is experiencing another boom of rehabilitation of streets and districts. For the last three years, not only the city’s image has changed, but also citizens themselves have become a catalyst for positive changes that we see in the life of Almaty. The authors of five projects, supported by the Soros Foundation-Kazakhstan jointly with Urban Forum Kazakhstan, tell about their work and nuances of work in the civil sector.

Irina Madnikova, the project on an inventory of bus stops on the outskirts of Almaty:

“We have made an inventory of 90 public transport stops in three uptown streets and the former bus station “Sayakhat”. We have taken a photo of every stop and compiled a catalogue of compliance of each stop to the Building Code. Each of them was reviewed for compliance with about ten criteria. We presented this work In September 2017 to the public in general. Also, we handed over the catalogue to the Department of Transportation and Centre of Development of Almaty; and in October, we received the first notice from the Centre of Development of Almaty, saying that our work was out of date, since the study was conducted in July, and the akimat had built 700 new stops around the city before that. We made an effort to go through the route for the second time. It turned out that seven out of 90 stops were replaced and three stops were knocked down completely. The rest remained in the same condition as before. At that, our communication stopped. Starting from last October, we have been trying to have a meeting with the Department of Transportation, and appeal to the Centre of Development of Almaty every month – all to no avail.”

“The Department of Architecture is open to discussion: we have made a list, in which we highlighted the most important and interesting ones among 945 houses in different districts of Almaty – stated as precarious housing and scheduled for demolition. There is a possibility to preserve some houses, say, brisk houses. To include this or that building in the list of houses of architectural heritage, we have to collect a massive evidence base. It is not like that somebody wants and puts this or that building on the list of housing protected by the government. We have to determine our criteria and values that will form the basis of the evidence base.

Currently we are at the stage of conducting social events and involvement of people into this process of taking decisions. We have held a few expert meetings, now we are focusing on elaboration of criteria and values. We have a group on Facebook and information partners who help us work with the audience. We would want the public to participate more actively. I think this is the most important now.”

“When I filed an application, I did not expect our example would be a notable one. I thought it would be a local project where a small group of local citizens improves the lake at local level. The best case I hoped for was that the rayon akimat would join us and activate its resources. It turned out that many people got to know about the project and we exceeded the initial bar of expectations. Now we are contacted by inhabitants of other neighbourhoods like Baganashyl and Fabrichnyi – they like our project and they want to do the same project in their neighbourhoood. Of course, we need to work with locals on a regular basis so as to change the mindset of people.

Our project is scalable. First, it relates to the environment, and environmental issues are always the matter of concern. Second, this project in connected with the reservoir and water resources. Few people know that in Almaty there are about 26 small rivers and dozens of lakes in the lower part of the city. We are going to write a guidebook which may be used to share our experience. We want to write about positive moments, advantages, lessons which we have got. For instance, work with kids. It is very easy to reach parents through their kids, children get easily involved in something new. On the other hand, we made mistakes which we want to warn others about.

I have not fully persuaded all rayon inhabitants into improving this place. Last year we worked with citizens, and this year we have built an amphitheatre. The construction of the amphitheatre – such a tangible object – really helped attract new people. So we were joined by people who we had never seen before. Also, we shouldn’t forget about the Soviet past which we had, when people used to the fact that the city authorities were responsible for everything. If I call people for a Saturday volunteer clean-up day “subbotnik”, people will associate it with the Soviet subbotnik – where people were forced to come. If I say ‘assar’, which is a good Kazakh tradition when people gathered to help, it won’t cause negative emotions. When we announced assar last summer, we had people who we didn’t expect to see. Therefore, it is important to find a way to connect to people, which will help bring them to your side.”

“The Project AUA evolved from a mobile application into a website where we write about air pollution issues both in Kazakhstan and all over the world. We work with the government authorities, and starting from August 2018, the data of our monitoring are published in the Kazgidromet bulletin on the environmental studies. It’s a small victory that means a lot to us. We work with Pavel Aleksandrov; his equipment was entered on a register and a few sensors he uses were sent for tests. When the equipment is sent back, perhaps his data will be published in bulletins. It’s rather important because today the data of state agencies and our data are very different. Our data show that the situation is very bad. This could urge the government to take radical strong measures for environmental protection.

I suppose they have realized that we can’t avoid environmental problems. They support us, they hear us. Environmental organizations like us or “Zelyonoye Spasenie” address very important environmental issues, which have to be solved.

The most important thing is that people have to break silence. If you are unhappy about something in the city infrastructure or something else, you need to find a way to deliver your thoughts and to be heard. It might be cooperation with an NGO or letters to the akimat. One of the main problems is passivity of the population.”

“In the beginning we made plans for a season – for the warm period of the year – from May to October. Certainly, we assumed that we would be able to gather a community, get acquainted with them, but we did not fully realize how we would be accepted, and how much we would be needed there. However, a preliminary survey revealed that citizens need such a culture hub because they can’t get such leisure in the neighbourhood. But we didn’t even expect how much the neighbourhood would be so active and to what extent this community would be stable without us. In the end, the result exceeded all expectations. First, the project lasted a year; second, there has been formed a group of inhabitants Tastak – they come every week motivated by their own development and communication.

When we understood that the project would be extended, the main difficulty was to maintain motivation and enthusiasm in our team and inhabitants. We realized that we had to conclude an agreement among all the participants and understand where it was going and what would be afterwards, and how we eliminate our direct participation in the project. So we signed a trilateral memorandum between us, citizens and the city administration. With that, we understood who does what. For example, the group participants provide cleanliness of the stage, they come to a rehearsal once a week, they do the total cleaning every month.”